I’ve made some big steps on my photo animation project in the past week or so. Today I finished lip-syncing all of Jennie’s dialogue, which constitutes the majority of the first episode, and I was able to copy the keyframes from the forward facing model to the 3/4 profile model without any trouble, which is very exciting to me because I don’t have to re-do all that work. The great thing I’m seeing in all this is that the default mode of these characters is a blank face, which is exactly the kind of thing I love to see in an actor. It makes the line readings seem that much more dry and odd. Of course, odd is the default for this whole thing. It’s really quite weird looking. And it’s the kind of detail work that makes my eyes tired at the end of the day.

I also used Photoshop’s Photomerge tool for the first time in order to create the background for the episode. I’m going to set it in a supermarket, so I went to my local Key Food and fired up my digital still camera. I put the drive mode on continuous shooting and pushed it down the aisle on a shopping cart. Then I had Photoshop figure out how to stick all the photos together automatically. It looks terrific, although it’s not particularly sharp thanks to a slightly long shutter speed. Luckily it’s a background so it can be out of focus a little.

I had a great time working on the first OpenCut project. I got a first-hand look at the Red workflow, which was really useful for me. And I made a fun video in the end. I didn’t win their fabulous prize package, and for obvious reasons I didn’t expect to. I was hoping to work on future OpenCut projects, but I’m skipping the current one. The main reason is the increase in price. I understand that all that shipping and copying takes a lot of effort, but the $25 fee for the first project was low enough that I could enter on a whim. Now it’s up to $75, which is a significant amount of money to pay to edit a commercial for someone else. Which brings me to my second problem. It’s a commercial… for a ski resort. I hate skiing, so looking at slo-motion footage of skiers is not my idea of a good time (although I remember having a great rainy day at summer camp watching a 16mm ski film in reverse). And if I’m going to make a commercial, I’m damn well going to get paid for it. I might still try the music video project they’re doing in the future. I watched a bunch of music videos in HD on MHD over the weekend and I was really disappointed in the lack of ideas on display in the videos these days. The Knights of Cydonia video was incredible though. 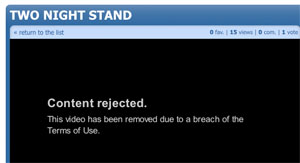 10 minutes ago I got a Google Alert letting me know that Two Night Stand had been posted on Dailymotion. I went to the page, and the movie was there, posted by someone else. Now, I give that movie away to anyone who wants it, and Dailymotion seems like a fine place to have the video posted, but I don’t want it posted under someone else’s username. That’s re-distribution, and I don’t cotton to it. It’s nice that this person is interested enough to share the movie, but you can do that by embedding the video from any of the dozen or so sites where the film is legally available.

So I sent my First Takedown Notice Ever. Dailymotion has a very easy to find form and I told them I wanted my movie removed. I got an email back within a minute or two letting me know it was gone from the site. I checked, and it is indeed removed. I was really impressed. Thanks Dailymotion! 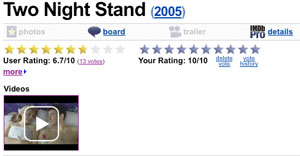 With no fanfare whatsoever, the “IMDb Theaters” program has expanded. When I logged into Withoutabox yesterday, I had links to upload Camera Noise and Two Night Stand to their respective IMDb pages. The Epic Tale of Kalesius and Clotho doesn’t have a link, although I suspect that’s because in IMDb it’s listed with the full subtitle “A Meditation on the Impossibility of Romantic Love in a Rapidly Expanding Universe” so without an exact title match it can’t automatically make the connection.

I like the idea of IMDb Theaters, but so far it’s really a quarter step into the new web world. IMDb is still the resource for answering questions like “how many movies has Christopher Walken been in?” (about 100) but its complicated system for submitting updates and changes has really held it back in the age of Wikipedia. For example, when I recently wanted to remind myself what happened in “The Cheever Letters” episode of Seinfeld, I went straight to Wikipedia where there are several pages of description. IMDb’s rigid structure doesn’t really allow for that sort of completeness although there is a very brief outline of the episode.

To be fair, IMDb includes comprehensive credits for people like me who don’t even rate a Wikipedia entry. So there’s that.

I like the idea behind IMDb Theaters, but so far it’s just a little video icon at the top of the page. Also, it doesn’t seem to track views or allow comments, so it’s a little like throwing it out into the void, which was one of my many problems with submitting to film festivals. There’s no feedback unless you get accepted and actually attend the festival. And even then it’s extremely limited.

Anyway, I’ll be keeping an eye on this thing.

This Vuze business has gotten me interested in making money from my own movies so I’ve put up a “Buy Stuff” link in the header. Anything available to buy will go up there. First up we have my collected shorts DVD. Sure you can get all these films for free online, but the commentary tracks for Camera Noise and Kalesius and Clotho are exclusive to the DVD. The quality’s probably better on DVD too, although these days Vimeo and Vuze and the like offer pretty high quality. DVDs are certainly very convenient.

Camera Noise Logo Merchandise
Great for filmmakers, film students, actors, or anyone else who loves making movies. These are just a few examples of the available products.

Trying to make money with short films is a fool’s game, even in the supposed Internet-based renaissance of the short. I’ve made somewhere around $150 from my short films, mostly from Revver, and I’ve spent a lot more than that making them. I never expect to make money on the Internet, but now that Two Night Stand is taking off on Vuze, I want to get paid!

Vuze shows an advertisement every time Two Night Stand plays, and as of June 30 they had a guarantee of $5 per 1000 views in many countries. If all of the downloads of Two Night Stand include a qualified ad impression, right now I’m owed about $500. That’s a significant portion of the production costs of Two Night Stand. But the guarantee has expired with no explanation of the current offer. And the Sales History for Ad Supported Content in my account shows “No Entry.” Does this mean I’m not getting any money? I’ve emailed Vuze but I haven’t heard back yet.

If they had never offered any money I would be totally happy with the explosion of views from Vuze, but now that the thought of money has entered my head I’m disappointed in the situation. Now it seems like if these downloads aren’t earning me money that I’m somehow missing out on an opportunity.

Update: Vuze has written back, and they assure me I’ll get paid for qualified advertising impressions. I don’t have a report yet on the number, but I expect it to be fairly substantial.

My cover-story in Editors Guild Magazine is now fully online and no longer has to be read in scanned PDF format. 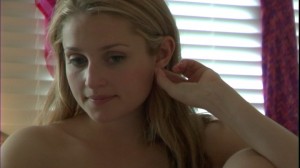 Over the past few days, Two Night Stand has totally exploded on Vuze. It’s over 20,000 downloads in its first week of availability. I know the thumbnail of Jennie has a lot to do with the popularity of the movie, but I’ve also seen a lot of people coming to this site searching for Two Night Stand over the past few days. Today is one of my highest traffic days in a long time. Of course, YouTube is up to 320,000, but that’s taken a long time and I almost never see anyone searching for info about the movie afterward.

It’s funny how things change. Two Night Stand was my first real post-college movie. I had a really hard time finishing the script without any deadlines. In early drafts they wandered around the small town they’d ended up in and got drunk in a local bar. After a lot of revision I ended up with just one location and two characters. I decided not to act in it because I wanted to focus on directing. It turns out it’s a lot easier to make a movie when you don’t have to act at the same time. We shot it in the summer of 2004 right before I moved to NYC. I took my time with the editing and premiered it in February 2005 at The Pioneer Theater along with a bunch of my other short films.

At the time I kind of thought I was done with the film. I had gotten everything I wanted out of it. I made a movie that looked good and didn’t cheat by using the documentary tricks that characterized my earlier films. If the sound recording was bad I couldn’t turn it into a joke like I did in Kalesius and Clotho. After spending nearly $1000 on festival submission fees for Kalesius and Clotho I was totally sick of the so-called “festival circuit.” I half-heartedly submitted it to a few friendly festivals and got into a few of them, although I was disappointed not to get into the Anchorage Film Festival, which is my favorite festival ever.

So Two Night Stand sat on the shelf until YouTube took off. I uploaded it there and hardly anyone watched it. Meanwhile, my Bad Webcam Sex video got 2 million views. Eventually things picked up and now it gets around 1000 views a day. It’s been really great to have all these viewers for a film I never expected to get much exposure. I don’t see any reason for short films to go to film festivals anymore. The Internet is the place for short films. At festivals they’re a sideshow at best.

Anyway, thanks to everyone who’s watched it, and I hope I can make some more films soon.

I just cut a new editor reel for myself. It’s in the usual place, and you can also see it right here.