Blog
You are here: Home1 / Blog2 / Editing3 / A Stopgap Solution

I was working on a movie in Avid Xpress Pro (on Windows XP) recently and I figured it was time to finally get some equipment so I (and a client) could watch the video on an external monitor. A DV deck is the usual way. You hook up the deck to the computer via firewire, the deck translates the DV to analog, you hook your TV into the deck and you’ve got NTSC video. Trouble is, I have very little use for a deck. Most projects I edit these days come to me already on a hard drive. DV tape is obviously on its way out, and spending $2000 on a deck I won’t be using much longer seems a little silly.

I was hoping to get an Intensity Pro. I didn’t need to capture or output any tapes, so that seemed ideal since it could also handle HD. But then I remembered that Avid doesn’t play well with others. Avid only works with Avid DNA products like the Mojo. The Mojo is essentially a glorified digital/analog converter that also adds 2:3 pulldown to 24p video in realtime and retails for $1700. It’s worth noting that Final Cut Pro adds 2:3 pulldown for free. 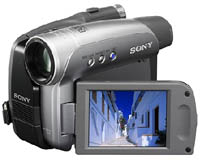 I considered a D/A converter, but they all run around $200 and don’t have any tape decks, in case I do need to capture a tape here and there. Eventually I decided that a cheap camcorder was my best option. First I got a $160 Canon camcorder. With Avid Xpress Pro I was getting a 16 frame delay and often drifting out of sync, which I assumed was because it was a cheap piece of crap. I returned it and got a $190 Sony DCR-HC28 since I’ve had such good experiences with Sony decks. I still get the 16 frame delay with the Sony camcorder, but I don’t have the drifting problem. I was working on a different project in Final Cut Pro, so I booted up the Mac OS to see what the delay would be. Turns out it’s only 2 frames, which is what I usually expect from FCP with a firewire deck. That really surprised me since it’s the same computer. From what I’ve read in online forums, the 16 frame delay is standard for Avid without a DNA like the Mojo. I’ve turned on desktop play delay, which keeps the video in sync, but it makes editing a bit more difficult.

I don’t have any plans to start shooting home movies, so I can’t say anything about the image quality of the camera. I can only assume it’s horrible.