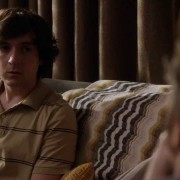 My website’s design was almost exactly the same for seven years. I built it out of the Blix WordPress theme back in 2006 and a few years ago in a fit of modernization I expanded the width of the main column. I always keep my resume updated, but mostly the site just sat there featuring months-old blog posts. But now I have a fancy, modern design thanks to the incredible WordPress theme designer Kriesi and his Enfold theme. Now everything works on the fancy smartphones nobody had in 2006. Rather than this musty old blog I’m now featuring my editor reel and many clips of projects I’ve worked on like this one from the Dead Possum episode of Maron featuring up-and-coming comedy star Josh Brener:

My favorite part is the tag system I added in. You can use it to look up all the projects I’ve done with a particular person. Want to see every Hal Hartley project I’ve been involved in? How about super-producer Jim Serpico of Denis Leary’s production company Apostle? Boom! Technology.

Check out all the cool new stuff. If you’re looking for an editor for your comedy series, might I suggest you peruse the Series section. Or if long-form is more your style, head over to the Features. I’ll do my best to keep the projects up to date, and maybe I’ll post in the blog a couple times a year.

At Least The New Mac Pro is New