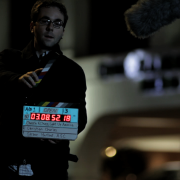 I’ve worn a lot of hats in my filmmaking career. I’ve been a script supervisor, data wrangler, post-production supervisor, assistant editor, editor, title designer, and every once in a while I’ve had to slate. 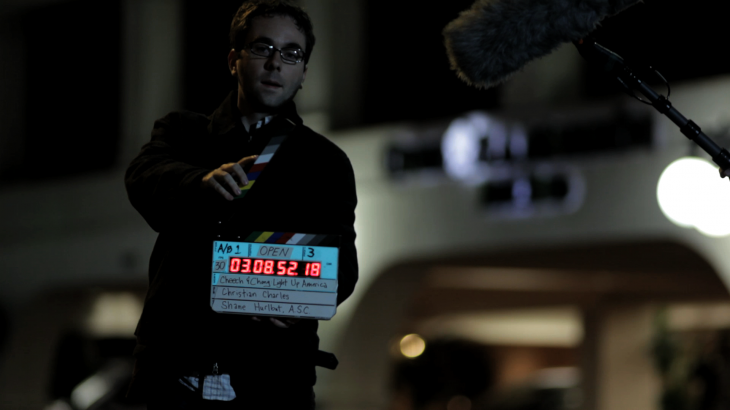 I rather enjoy slating, because later on when I sync up the movie, I know I’ll have quality slates.

I don’t always get quality slates. If you’re slating a movie, here are a few tips to make the editors happier:

Start with the slate in the frame, clapper raised, before the camera rolls.
The first frame of the shot should look a lot like the one above. While the shot is setting up, pay attention to what is actually in frame so you know where to put the slate. On a wide shot like the one above, it’s pretty easy to nail, but in a close-up on a long lens you might need the camera operator to help you find the spot. A slate without the slate in frame is not a slate. And you might need a rack focus. An out of focus slate is not nearly as helpful as one in focus, especially if it’s a smart slate. And you shouldn’t put a slate in an actor’s nose, so it’s a lot easier to find a focus mark for the slate and then rack to the first position for the scene.

Clearly say the shot and take number, then “marker.”
Make sure there is a microphone near you. Just like the camera might need to change focus, the boom operator might need to swing over to you. And don’t say letters. Say words. 24A take 3 is “Twenty-Four Apple Take Three… Marker.” Don’t feel embarrassed if you don’t know the standard codes for letters. You can be creative.

Hold the slate steady as you push the clapper down.
I’ve seen many slates where the slate is moving as it claps, which blurs the whole thing so much that you just have to guess where the mark is. Be careful. Plant your feet. Use two hands. And don’t just let it drop. Push it down. On the other hand, you don’t want to smash it a few inches from an actor’s ears, so you can push it down softly. In that case, say “soft sticks” so the editors know not to listen for a huge click.

If you mess up the first slate, say “Second Sticks.”
There are a lot of things to deal with when syncing a movie, and it can be hard to find the right slate if there’s more than one. If you did the first one out of frame and then re-adjusted to get it right, or if the sound wasn’t recording yet, it’s a quick and easy way to let the editors know.

Sync up a movie yourself.
Nothing teaches you how to slate better than wading through hundreds of bad slates trying to fit all the pieces together.

Back it Up! Two Night Stand Two
Scroll to top
Loading Comments...