Through no fault of my own, I’m quickly getting a lot of experience cutting recordings of live performances. Last September I started small with a bunch of online videos recapping New York Fashion Week. It was all single-camera footage, with a lot of quick-cutting and jump-cutting. I think it was the first time I ever found myself using the quick-flash-to-white transition so popular with the kids today.

In October I started cutting some Jerry Seinfeld stand-up performances, which were shot with three cameras. I synced up the three cameras and used multicam editing in FCP, which turns editing into a totally different animal. Now, rather than assembling a scene shot by shot, you can kind of wade through the stream of images and go with your gut to pick the nicest angle of the ones available, then revise to your heart’s content. I had cut some stand-up before, in my very early film about Tim McIntire, but it was all montage-based, with very little spacial continuity between shots. Learning where to cut in Jerry’s movements was very interesting. He’s not a relentless pacer like Chris Rock, but on particular beats he turns his body to address different parts of the audience, and he does move back and forth a bit. It’s something he’s obviously thought a lot about, and as an editor it’s not something I wanted to get in the way of. I wanted the changes in camera angle to stand in for, and highlight, the changes in focus he’s giving to the various parts of the room. At first I wanted him to almost complete a turn before I cut, but I found that anticipating a move by a few frames could be very effective, so he turns into the new angle rather than already being there. Of course cutting in the middle of the action often works too. It all depends on the context. 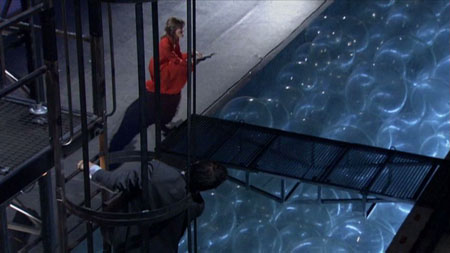 Almost immediately after I started the Seinfeld project, I cut the film version of Hal Hartley’s staging of Louis Andriessen’s new opera La Commedia. In the spring I edited a 5-screen movie that was projected during the performances, and two of those performances were filmed with two cameras. So the material we had to work with was the original movie footage, and up to 4 different angles of the performance. Unfortunately, good audio recordings of the shows that were video taped did not exist. Only the premiere had a good audio mix. So I had to get very creative with the editing. I could only hold on a performer singing for a few seconds (if I was lucky) before the shot would start to drift, and I’d have to slip each shot a few frames in order to keep everything in something close to sync. There was always the question of whether to show some of the stage or some of the movie. In the theater you can have 10 different things going on at once, but in the film we just had one at a time. We considered doing split-screen for a while, but it never really seemed like the right thing to do. The whole thing is confusing enough as it is, since there are two related, but slightly different plots going on at the same time between the movie parts and the staged parts. Eventually we worked out a method, and I think it was by far the best work I’ve done on anything. 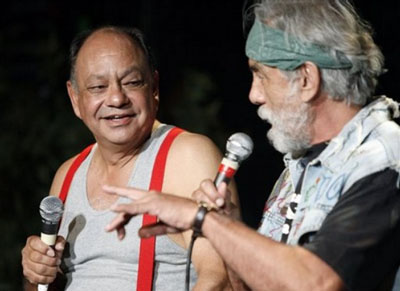 Next up, and very exciting, is a recording of Cheech & Chong’s Light Up America tour. In March they’re going to shoot two performances with around 5 cameras each, plus some backstage action with the two gentlemen. I’ll be editing the whole thing myself. I can’t say too much more about it, but I think it will be a very cool project. Definitely the highest profile thing I’ve worked on. There will be a lot more angles to work with for the performance, and it’s all being supervised by a great DP. I expect we’ll have good, in-sync sound recordings as well.