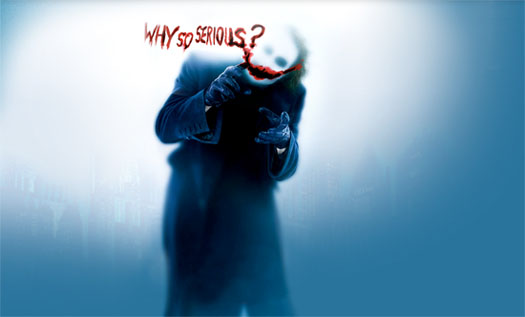 It seems like nobody is happy with this year’s Academy Award nominations. I’m not happy either, but since I started making movies I can’t remember being happy with the Academy Awards. A lot of people are suggesting that not nominating The Dark Knight for Best Picture is a poor decision because it shows how out of touch the Academy is with mainstream America. I think The Dark Knight is a great film, but the idea that somehow an award for excellence should be determined by box office success is silly. Now, that is not to say that box office success doesn’t determine who gets nominated for these awards. Big, fancy, high-grossing films are the rule, rather than the exception, when it comes to best picture winners. But I think what gets me the most is that I’m supposed to care what all these people think.

In general I’m like a casual racist when it comes to the Academy. I know some of them personally, and I like the ones I know, but as a group I think they’re lazy and stupid and kidnap babies. I think it is a very good idea for the motion picture industry to give themselves awards for excellence. By all means, the Academy should get together and vote on their favorite movies every year. But I don’t want to hear about their decisions anymore. Excellence in art cannot be determined by popular vote. There are movies that I like, and there are movies that I don’t like. Sometimes my opinion aligns with the Academy and sometimes it doesn’t. But I don’t find their opinions instructive.

I might not care about what the Academy thinks of particular movies, but I do love to read film reviews. I read the New York Times and The AV Club regularly. I find them useful both before and after watching a film. Before I see a film, there’s the obvious benefit of being told whether a movie is worth seeing. I read those reviewers regularly enough to know how my taste aligns with them and sometimes even a negative review can indicate that I’ll enjoy a film if I happen to disagree with the reviewer’s general opinions. After seeing a film, a review can help me focus my thoughts about what did and didn’t work.

I liked Benjamin Button quite a bit more than most movie critics, even ones I respect a lot. The fact that a bunch of actors and filmmakers felt the same way doesn’t make the movie any better. A movie like Frozen River getting a couple Oscar nominations is not going to sway me from my opinion that I wouldn’t want to see a movie like that because I’ve seen enough movies like it already.

The Academy Awards can be a force for good. It can raise the profile of films that might have otherwise fallen through the cracks, but that’s not its usual mode. The usual Best Picture winner is something already sucessful, which doesn’t really need the extra exposure. A Best Documentary or Best Foreign Language award can definitely be a big boost, since those films have usually barely been released theatrically in the U.S. when they win, and it can seriously impact a small film’s success in a slow roll-out through art house theaters.

Luckily, I don’t have to watch the show this year because I’ll be out of the country, on vacation.