For the past couple weeks I’ve been working for Revel in New York, a very cool new online video series. I started after they had already shot several pieces, and some of them had already been captured and assembled. Almost all the video was shot 24p on a DVX-100 and captured at 29.97. I figured I wouldn’t try to get too fancy, and just kept editing that way since some work had already been done at 29.97. Then I exported an edited video for upload and I took a look at it. As I should have realized, it was full of interlacing! There are a lot of moves on still photos, and it was just unacceptable. So I decided to try something I’d never done before. I took a piece that was edited as regular old 29.97 and converted it to 23.98.

First I media managed everything, so I could always go back if I screwed it up. I made a new project copying only the linked media, with 3 second handles. The handles were very important, because without them I couldn’t properly remove the pulldown on some clips. There needs to be a little bit of leeway at the beginning and end of the clip, since there will be some frames removed. 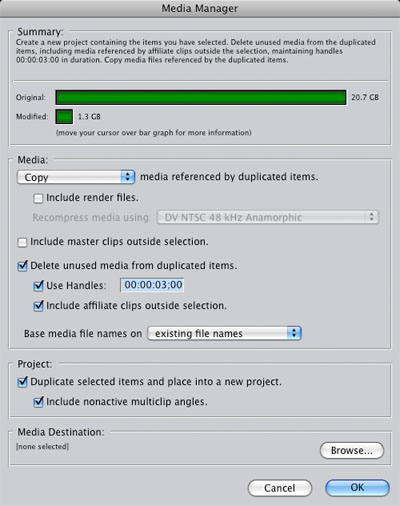 Once I had my newly created project, I selected all the DV NTSC master clips in the bin and clicked on “Tools/Cinema Tools Reverse Telecine.” Cinema Tools went to work on all the clips, and automatically removed the 2:3 pulldown.

Now I had 23.98 media in a 29.97 sequence, all of which was informing me of a newfound desire to be rendered. So I hit ⌘ + A to select all the clips in the sequence, copied to the clipboard, created a new 23.98 sequence, and pasted into the new sequence. Now I had 24p clips in a 24p sequence, with no need to be rendered. The trouble of course, was thanks to the removal of 6 available frames per second, some of the clips were now off by a frame. Some were even out of sync, but they were nice enough to tell me that. I had to go through manually and make sure everything fit together properly. Since the pieces were only about 3 min long it wasn’t too odious. Every once in a while I had to slide a clip 1 frame forward or back.

Once I was satisfied that I had a sequence that matched my original cut, I exported a fully progressive QT. The moves on the artwork are significantly better now, and there is no interlacing to be found.