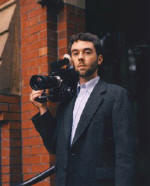 Let’s make this clear: There’s no need for women to run away from Kyle Gilman. He’s not a denial-ridden stalker. Besides, he’s got a steady girlfriend now and he is SO over his crush on the beautiful and talented Jennie Tarr.

Still, if anyone remains uneasy, Gilman has only himself to blame. A filmmaker raised in Wendell, he made both of his short, independent films with Tarr at their epicenter. And why not? She clearly has the gravitational pull of a black hole, as Gilman’s character points out.

Just as clearly, however, Tarr doesn’t feel the same way about Gilman.

In the first film, “Camera Noise,” Gilman acts the part of a student filmmaker whose professors have gotten bored with endless footage of his girlfriend.

So, Gilman, who was indeed a student filmmaker at the time, decides to film a breakup with his girlfriend. Instead of drama, however, this creates comedy. The girlfriend, played by Tarr, won’t let the relationship go.

“She always thinks that these terrible things that are happening to them will make their relationship stronger,” Gilman said.

In the second film, it is Gilman — again playing himself — who won’t let go. Called “The Epic Tale of Kalesius and Clotho,” this film is being shown at the Ninth Annual Northampton Film Festival, which runs from Nov. 5 to Nov. 9.

Its subtitle is “A Meditation on the Impossibility of Romantic Love in a Rapidly Expanding Universe.”

Gilman created this film as his senior thesis at Harvard College, where he now works as a teaching assistant to filmmaker and professor Hal Hartley. It chronicles a filmmaker’s attempts to mold another actress into the perfect copy of his former leading lady, who has spurned his advances.

How about Gilman? Is he just acting as he ineptly stalks Jennie throughout the second movie? It’s hard to say and perhaps pointless to pursue.

Gilman is so skillful at intertwining fact and fantasy, that those who attempt to unravel his creation risk ruining it. Besides, what’s the point? Is “Kalesius and Clotho” a real Greek tragedy? No, but it probably should have been.

Hanging up the phone after a painfully awkward phone conversation with Jennie in “Kalesius and Clotho,” Gilman gets into a debate with his soundman, who warns his obsession is becoming pathetic.

As long as the camera is still rolling, Gilman argues, it’s reasonable to assume his pursuit of Jennie will have the happy ending found in many films. What happens, the soundman asks, if you turn the camera off?

“Well, actually, I’m not sure I want to find out. Wait, hold on,” says Gilman, as the soundman reaches over. The screen goes blank. There’s a pause. Then the soundman is heard saying “You’re right. This does suck.”

Still, it’s fun to speculate about reality and that’s exactly what area residents will get a chance to do since both Gilman and “Kalesius and Clotho” will be on hand at the festival Sunday, Nov. 9. The 27-minute film will screen with three other short films in Stoddard Hall at 10 a.m.
Stoddard Hall is located on Lower Elm Street. The phone number there is (413) 584-2700. To find it on a map, go to this site on the Internet: www.smith.edu/map

In its ninth year, the film festival packs just a few days with more than 90 films, panel discussions, and opportunities to chat with filmmakers.

In addition to numerous short films, several features will be shown, including some sneak-preview screenings of “The Singing Detective,” a musical based on Dennis Potter’s acclaimed mini-series; Michael Winterbottom’s new film, “In this World,” and Sundance Film Series favorite “Dopamine.”

The filmmakers are from all over the globe. Gilman, however, is among those with a local connection to this area. Born at Franklin Medical Center, he grew up in Wendell, where his mother, Mary C. Gilman, still lives. His father, Adin, lives in Greenfield. Gilman, who now lives in Cambridge, graduated from Mahar Regional School and then from Harvard College in 2002.

Gilman didn’t start to suspect he wanted to be a filmmaker until he started leafing through the course catalog for Harvard. While planning to major in English, he was mostly attracted to the film courses he found there. His fate was sealed while attempting to study English literature.

“I didn’t like the whole process of analyzing English literature, which is what English is all about,” he said.

At the time, Harvard was known for its documentary film program. It was Gilman’s good fortune to be there when professor Hartley arrived on the scene to teach fiction filmmaking. “It’s starting to change at Harvard,” said Gilman. “It’s been kind of a wasteland.”

Additional local filmmakers at the festival include Steve Alves of Greenfield. His “Talking to the Wall” explores Greenfield’s rejection of Wal-Mart and the corrosive effects of large retail chains. A 10-year effort, the film shows at 5:15 p.m., also at Stoddard Hall.

David Larue, who lives part of the time in New Salem, will be showing his “Potholes,” a whimsical tale of what a farmer does with a 1977 Cadillac found in his field. Filmed in Franklin County, and using local actors, this film will screen on Saturday, Nov. 8, at 4 p.m., again in Stoddard Hall.

Both Alves and Larue have been at the Northampton Film Festival in the past. This will be Gilman’s first time and he’s glad for the opportunity. Northampton is his old stomping grounds. He used to frequent the Pleasant Street Theater there as a youth. He is not, however, thrilled that people will see his film on a Sunday morning.

“I don’t think morning is a good time for comedy,” he said. “I think people need a little time to wake up before they start laughing.”

Gilman chose comedy for his first two films because it seemed a safe approach at the time, less risky then attempting a serious drama. Naturally, he was at first insecure about his abilities.
“I knew I could pull off a bad film well,” he said.

This insecurity is why his first short, “Camera Noise,” is a spare production. Not well lighted, he did it without a crew and virtually all of it was improvised.

Still, it introduced him to Tarr, who was a musical theater major at the time. His crush eventually made their relationship awkward. So, he was certain she wouldn’t agree to star in a second film. After all, it depicted an obsessive filmmaker trying to mold another actress into the perfect copy of her.

Still, he had to ask her. He needed a senior thesis and it’s hard to come up with ideas for a film.

“At first, when I asked her if she could be in the movie, I was worried. Because, it was kind of creepy,” Gilman said.

It turns out Tarr wasn’t worried at all about being stalked — in the film — by Gilman. She did get a little concerned, however, once the filming started. She was in New York City and couldn’t see how it was progressing.

Then, Gilman sent her photographs of the other actress, whom he’d found through a friend. Called Janine in the movie, Ashley Linton and Tarr are strikingly similar in ways that go beyond their looks.

Tarr got nervous. “That kind of freaked her out,” Gilman said.

Then, it was time to film the apartment scene. In the film, Gilman and a cameraman travel to New York City and knock on Jennie’s apartment door. In typical Gilman fashion, the scene is Tarr’s actual apartment. The bare-chested boyfriend who answers the door, however, is an actor.

It took a while to find somebody Tarr was willing to kiss on camera. Finally, they found a candidate she knew from her college days. “I kept on asking her to suggest somebody and she would never do it,” said Gilman. “He was basically the only actor in New York who she was willing to kiss. So, he got the part.”

Other challenges in the film included losing many of the early scenes to an ill-adjusted camera. Several scenes had to be reshot. Then, the Sept. 11 terrorist attacks on the United States halted work for a time.

Once he submitted the film for his thesis, there were still changes to be made later. For example, it used to end with “the gods smiled on Kalesius.”

Gilman suspects this ending came about because of his character’s need for a happy ending. Whatever the reason, many of those who saw that ending didn’t like it.

“A lot of people were unhappy with it, particularly the people who graded it,” he said.

So, he recrafted it, spending a few thousand dollars of his own money to do so. He also reworked the chalk board scene and managed to get his new girlfriend in as the script supervisor.

Unlike in his first movie, Gilman risked exposing his shortcomings by attempting to control events instead of just filming whatever happened in front of his camera.

He had a crew this time. There was a lighting expert on hand. Dialogue was written out and scenes were practiced beforehand. That didn’t eliminate spontaneity, but he started each day with a plan.

“‘Camera Noise’ was all improvised,” he said. “I had no faith in myself as a writer.”

While “Kalesius and Clotho” is actually only a few minutes shorter, it seems to move much faster than “Camera Noise,” said Gilman, because it’s better crafted. Still, they are both comedies, as opposed to a serious drama.

“That’s the kind of movie I like to watch,” explained Gilman. “A lot of what I do is in relation to Woody Allen.”

Allen’s genius, says Gilman, is directing comedy. “It drives me nuts that he wants to be a dramatic director,” he said. “I think if you take the comedy seriously, you can create a really good movie.”

Now that he’s got two films under his belt, Gilman is feeling confident enough to take his own comedy more seriously. His third film, tentatively called “Two-Night Stand,” will be more choreographed than the first two. He’s got about half the script written.

“I think I’m done with the whole extra level of reality,” he said. “The next movie I’m going to do is more straight forward.”

“They never actually figure out what’s happening. Not yet, anyway. I’m not done yet,” Gilman said.

He’s also not done with Tarr. She’s agreed to star in this movie, as well.

To find out more information on the film festival, and to download the full program guide, go to this Web site: http://www.niff.org/.

General admission tickets are $8 each, students with identification and members of WGBY get in for $7. There are also tickets for special events. A pass for the entire festival costs $125; WGBY members pay $95.

Tickets can be purchased at the venue, before the films are shown. They will also be available at the Haymarket Cafe beginning Wednesday, Nov. 5.

Originally published in the Greenfield Recorder