I edited the movie, but I would like to emphasize that I did not edit this trailer. This is the so-called “red band” trailer, so put on your headphones if you’re at work.

I edited this promo for The Marriage Ref a couple weeks ago. It was shot entirely on the Canon 5D Mark II. It was a really fun experience, and Mr. Seinfeld came in a couple times to work with us. It’s great to see something I edited released so quickly but the quality of the encoded video is pretty low. It’s my understanding that this full version of the story will not be shown on TV.

I’ve been working off-and-on with Hal Hartley since 2001 when he was my college thesis advisor. I’ve spent time as his teaching assistant, production manager, editor, and now we’ve built a new website for his company Possible Films. There have been several incarnations of the site over the years. In 2004–05 I packed envelopes with DVDs and CDs ordered through PayPal. For the past few years the site has been a very simple affair, with no direct sales. But now we’re doing something that represents a very interesting future for film distribution. We’re selling downloads of movies and soundtrack music straight from the website. We’re also premiering original content (again, video and audio) for free streaming. The really exciting goal is to premiere a feature film as a downloadable movie. There’s no DRM on anything, so our customers can watch the movies they buy in any way they want. I put a lot of work into this project over the past few months, and I’m really proud of both the look and the functionality of the site. Please, take a look at it, and if you like what you see, think about buying something.

I can’t imagine many people made money from the Vuze HD Network. But I happened to pull in some serious, much-appreciated cash from the fluke popularity of Two Night Stand last summer. I earned back production costs of the film in a single quarter. Vuze was one of the only user-generated content networks to do pre-rolls with payments that didn’t require clicking on the ads. But now with the latest release of the Vuze client, the HD Network has turned into a collection of RSS feeds for stuff like Rocketboom & the Onion News Network; content producers who don’t need any help getting hits. My videos still show up if you do a specific Google search, but I can’t see any way to just stumble across them while browsing, either in the client or on the web. And I no longer see any pre-roll advertisements. I used to see a few dozen seeds for Two Night Stand at any given time, but in the past week that’s dropped to 7. Vuze really seemed to be attempting to bring something worthwhile and legitimate with the Bittorrent platform, but I guess it didn’t work. It’s a sad end to a noble experiment. 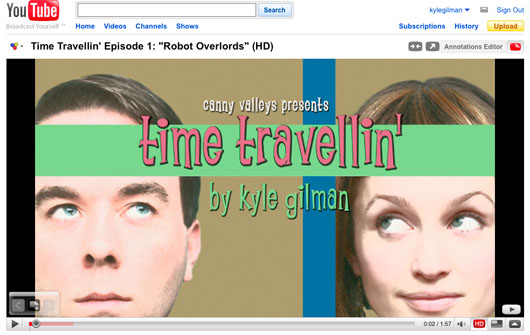 I don’t know what this is about, but when I watch 16:9 videos on YouTube, I have 50 pixels of black on either side of the video. You get the right aspect ratio if you switch to a smaller player by clicking on the –><– button on the upper right, but then the video is too small. I haven’t seen any announcement from YouTube about it, and only a few people around the Interwebs seem to be complaining. I would like to put my complaints out there. Widescreen was a good idea. Pillarboxing is not. It’s even worse with 4:3 videos, although to be fair, pillarboxing on 4:3 videos is expected and not a big deal for me) 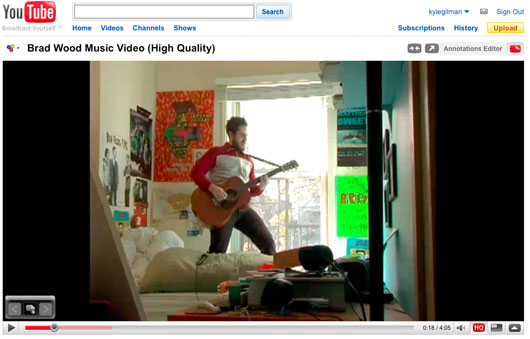 This is a collection of YouTube videos that highlight projects I’ve worked on in the past few years, as an editor, trailer editor, assistant editor, post supervisor, title designer, or even boom operator. Enjoy.

I make a few bucks here and there from YouTube, but as I was looking at my stats recently I decided to calculate how many impressions I would need in order to live solely off YouTube income.

My current eCPM for videos is $0.76, meaning on average for every 1000 impressions I’m earning $0.76, or $0.00076 per single impression. Yeah, web video is glamorous. I’m going to say I would need $40,000 from YouTube every year in order to live comfortably. That works out to 52.6 million impressions every year! That’s how many people watched the Friends finale. Obviously that doesn’t have to be for a single video, or for a single hour at a time. But that’s just to earn $40k! It seems like an unobtainable goal. YouTube’s ad rates are too low, and the viewers aren’t clicking on ads enough.

UPDATE: It turns out only 80% of the money earned through YouTube actually gets to me. YouTube takes a 20% cut, although the eCPM is calculated using the full earnings. So I’m actually receiving more like $0.60 per 1000 impressions, which moves my target to 66.6 million views!

You really have to question whether it even makes sense to have click-through ads on video. If you click on an ad while reading a web site, the web site will be there right where you left off. If you click on an ad while a video is playing, you’re interrupting something that is designed to play out in a specific amount of time. If a viewer is engaged they shouldn’t be clicking on ads. Especially if they’re for “night stands” like my “Two Night Stand” video gets. It’s like one of those Bing ads. TV has the right idea. I’d have no problem if I could put in act breaks on my videos to increase the exposure to revenue-generating material. Pre-rolls (and to a lesser-extent post-rolls) are great as well.

I’ve spent a lot of time on this blog writing about 24p editing because it’s so complicated and misunderstood. Last year I wrote about shooting 24p but editing 29.97 arguing that nobody is going to notice the difference. This year I want to write about the reasons to go through the trouble to shoot and edit 24p. And, as always, 24p = 23.98 fps

1) Blah, blah, blah, film blowups. My big pet peeve about 24p discussions is the obsession with film blowups. First there was the completely false idea that shooting 24p “advanced” was somehow better than 24p “regular” for doing film blowups. I hope nobody believes that anymore. As long as you use the right workflow, there is absolutely no difference in the end product. The more pervasive rumor is that the only time it makes sense to edit in 24p is when you’re going to do a film blowup. This is also false, for reasons I’ll get into below. And who the hell is wasting their money by blowing video up to film anymore?

2) Computers. Here’s my big reason for progressive 24p editing. A lot of video is made for computer displays these days, and computers and interlacing go together like two things that don’t go together. If you’re going to show your film on the web, it’s going to look a lot better at 24p than 29.97 with pulldown in it. And considering that a lot of web video is higher quality than DVD at this point, you’ll really appreciate the boost.

3. DVDs. If you make a 23.98 QuickTime and compress it to MPEG-2, it will play perfectly on any DVD player. If your DVD player can upconvert and output 24p via HDMI, it might actually play it that way on your 24p HDTV. If you play the DVD on a computer, you won’t see any interlacing. And, since DVD encoding is generally based on average megabits per second, the fewer frames you have in a second, the more data goes to each frame.

4. Educational. Editing 24p video has taught me so much about the way video works. I worry that computers are so easy to use these days that kids who didn’t grow up have to create config.sys boot menus in order to play Doom won’t really get under the hood of their computers and learn what they’re really doing. In the same way, if video just works (like it used to) then you could edit for years without really knowing what you’re doing on a technical level. I like to know how things work, and I think it’s valuable for more people to know. The proliferation of incompatible video formats may be infuriating, but it requires people to learn about technology in a really useful way. It also helps me pay my rent on time every month.