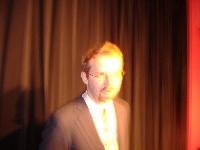 The Two Boots Pioneer Theater on Avenue A and 3rd St. in Manhattan is one hell of a cool theater. For 4 years, Ray Privett has been the man behind the curtain keeping it the weirdest and most experimental of New York’s first run-theaters. I first met Ray when he gave Richard Sylvarnes’s The Cloud of Unknowing a week-long run, guaranteeing a review in the New York Times. At the time I was the brand-new head of distribution at the brand-new company The Possible Films Collection. Only after weeks of emailing him did I learn that he was my friend Randy Bell’s new roommate. We went on to do a sold-out screening of Hal Hartley’s short films, where we sold a ton of DVDs, a two-week run of The Girl From Monday, and most importantly, an evening of my own short films called “Kyle Gilman: Some Success but Mostly Failure” which featured the world premiere of Two Night Stand. I’ve never screened my films together like that at any other time, and it was really gratifying to do it with such a surprising and appreciative audience.

And just to connect me to The Pioneer even closer, The First Sundays Comedy Film Festival moved there a few years ago. They were the first people in NYC to show any of my films. They even showed the Bad Webcam Sex video as part of The Pioneer’s online video series (after some other online video series decided they didn’t want to share their screening slot earlier in the week).

But after 4 years of a job that never seems to take a break, Ray is leaving The Pioneer. He will be missed. I hope he has a great time with his new projects, and I hope The Pioneer doesn’t suck without him.

The Tyranny of the ThumbnailFilm & FCP
Scroll to top