While we were doing the online edit for Fay Grim, we got word that the sales agent wanted to make a poster for the Toronto Film Festival and it needed to be done like yesterday. Hal and I took half an hour and mocked up something we liked, assuming the people who actually knew how to market films would step in and make a bunch of changes, like adding international superstar Jeff Goldblum’s face to the thing. 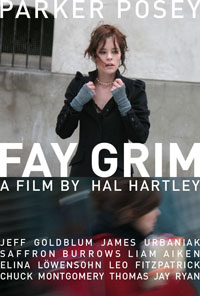 Imagine my surprise when 6 months later I see my poster on IMDb, and on the official website. The logos and whatnot have been added, and there’s a bar in the middle that says “Featuring the continuing adventures of Henry Fool” which I love. Other than that, it’s the same thing we threw together in August.

A similar thing happened with The Girl From Monday. While I was singlehandedly distributing the film in well over 5 theaters across the U.S., I made a poster that I liked quite a bit. Then we licensed home video rights to Netflix, who sublicensed the DVD distribution to Hart Sharp. I assumed they knew better than I did how to make a movie poster, but they decided to re-create my design, but slightly differently. Hal and I ended up giving them a new title treatment which they reduced in order to make the lovely Tatiana Abracos more prominent, which was something I definitely couldn’t argue with. The final DVD is definitely an improvement, although I don’t like the uneven space between the top and bottom of the billing block, but that might just be the bleed at the top. 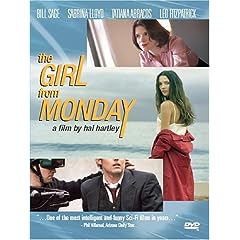