Today I finally took the plunge into HD TV. I’ve edited two HD movies, one was shot at 1080p24 and edited offline in SD DV, and currently I’m working on a project that was shot on the HVX-200 at 720p24 which I’m actually editing in HD (With absolutely no trouble! Thanks Hackintosh!)

I’ve had progressive-scan “HD” monitors since I was in high school, but those of course were attached to my computer and until recently they were 4:3 CRT monstrosities that reached a peak of 85 lbs. I finally upgraded to a 20″ widescreen Dell LCD for my trip to Berlin and it’s wonderful. I can watch HD trailers and edit DVCPRO HD movies with it, but there’s not a lot of HD content I can watch on my computer. It takes too long to download and I have to watch it at my desk. Movies and TV are for the living room.

For the past 6 years or so my living room has been graced with a 27″ 4:3 CRT that would never be called flat. I’ve always resisted trading up because frankly HD is not quite there yet. My mantra has been, when I can hold an HD movie in my hand, then I’ll buy an HD TV. Well, technically I could go to Target and hold an HD movie in my hand, but I still would have to spend half a grand on a high definition DVD player that could be obsolete in a few years thanks to an ill-advised format war.

So I cheated. I’m desperate for an HD TV, but I still only have one delivery source: my good friends at Time Warner Cable. Considering how much television I’ve been watching lately, and how many channels are broadcasting in HD now, I decided it was time. The question then was what form my new high resolution television would take.

As I always do, I did my homework. My first choice was a 16:9 HD CRT, which is generally the cheapest way to go. There is still no better way to look at video than on a CRT. The blacks are black, the colors are accurate. It’s the way we’ve seen TV since cavemen roamed the Earth. But CRTs don’t get very big. Thanks to the limits of physics, they go to the low 30 inches and stop. Even if they could get bigger, you wouldn’t want it to because it would weigh twice as much as you and break your entertainment unit. Even the 30 inchers break 100 lbs.

So I moved on to LCD. They’re light, I already had an LCD monitor, and LCDs can do 1080p! I knew that 1080p is the future of HD material. Some day everything will be 1080p and I didn’t want to be the sucker with a 720p display. So I went up to B&H and looked at their impressive display of HD televisions.

The first thing I noticed was something I couldn’t notice: a difference between a 37″ 1366 x 768 LCD and a 37″ 1920×1080 LCD. Up close I could almost convince myself there was a difference, but from my 6 foot viewing distance I couldn’t see any difference whatsoever.

Something was up here! Was it possible that resolution is not actually the most important determination of quality for me? It turns out there are a lot of things I care about more. It turns out black level and refresh are way more important. And the LCDs I saw at B&H couldn’t cut it. Obviously they’re turned up a bit to provide enough brightness to compete with the lovely fluorescent lighting in the store, but I noticed a TV hiding up by the ceiling that didn’t have any trouble with black levels or refresh rates (which home calibration of the LCDs wouldn’t fix). 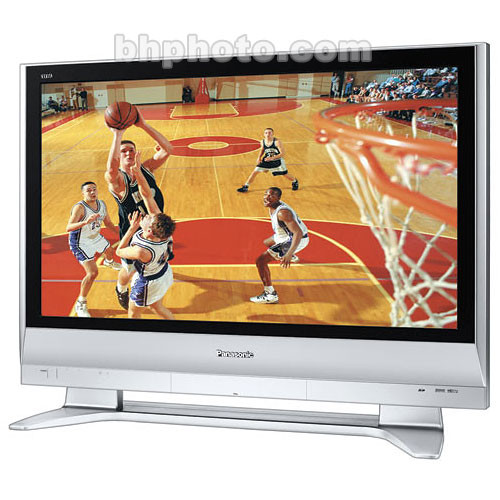 But it was a plasma! At a lowly 1024×720 I had originally considered plasma beneath my notice. LCD is the future! But damn was it pretty. And really isn’t that the only important thing? It has to look pretty. And not cost a fortune. It turns out I could get a 37″ version of that Panasonic plasma for $1100. It seemed like a good deal to me.

But then we started having screenings of the movie I was working on at PostWorks. They had a conference room with a large Panasonic plasma mounted on the wall. It looked like my baby, but it didn’t have speakers and it was totally black. We were watching SD 14:1 compressed DV zoomed in to fill the screen, and it looked awesome! So I looked it up and discovered Panasonic’s professional line of plasma “monitors.” 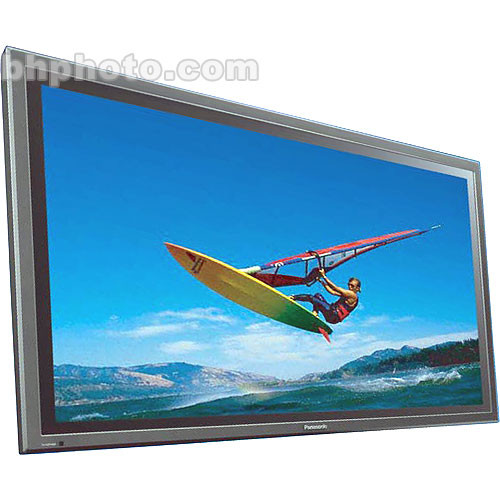 Not only are they better reviewed, but I wouldn’t be paying for things I wouldn’t use like speakers or integrated HDTV tuner. The thing that held me back at first was the question of HDMI input. The consumer model had two HDMI inputs. The professional didn’t come with any. I could buy an expansion card for some extra cash but that still only gave me one HDMI. But then I thought of something.

What if some day I want to use this thing to screen a rough cut of a movie I’m editing in my home office? I could get an HD-SDI expansion card for the plasma and for my computer, and run SDI cables from the office. Unlike HDMI, SDI cables have no problem traveling over long distances. That was the clincher. Not only did it make me excited thinking about the flexibility, it also made the whole enterprise more tax deductible.

So today I ordered a Panasonic TH-37PH9UK 37″ Professional Plasma Display from B&H for $950 plus a stand and an HDMI expansion card from Amazon. The TV and stand will arrive tomorrow. I’ll pick up an HD DVR from Time Warner and an HDMI cable from the Apple Store (what a price!) and for now I’ll be running my old interlaced DVD with component output. I’m very curious to see how that turns out. I’m not in the mood to buy a new DVD player when I’m just going to get an HD one in the next year or two.