There was no mention of it on stage at the WWDC yesterday, but the Mac Pro has finally been updated after almost two years. There is a slight increase in the clock speeds available, and there doesn’t seem to be a dual quad-core option available anymore. The processors are still last-generation Bloomfield & Westmere-EP Xeons. Newer Sandy Bridge-EP processors were released in March, which as I understood it was the main reason Apple had to wait so long for an update, and why there should have been an update this week. The Sandy Bridge-EP processors start at 6 and go up to 8 cores! Other things that would have been reasonable to expect include updated graphics cards, USB 3.0, and Thunderbolt ports. Since FireWire is gone from the MacBook Pros, Thunderbolt & USB 3.0 are going to be available on a lot more drives in the near future and it would be great to have access to those ports on Mac Pros.

The Mac Pro is not exactly overpriced even with two-year-old technology. You would have a hard time putting together a computer with the same parts for much less money. But given the option, you would also be foolish to build that computer today. I happen to know that you can build a really great Sandy Bridge desktop computer for a lot less money because I did it last year with a Core i7-2600K-based system that cost me less than $1000 in parts. With the release of Ivy Bridge MacBooks you’ll soon be able to build your own Ivy Bridge desktops as well. I’ve been building hackintoshes since 2006, and it is much easier to set up now than it was in the early days. I’ve found that once the software is set up it’s as stable as any Mac Pro I’ve ever worked on and runs very fast.

But hackintoshes are only for individuals and small businesses willing to live on the edge. I’m teaching FCP editing classes at The New School this year, and they have hundreds of Mac Pros running FCP. I would be laughed out of the room if I suggested they replace those aging hulks (they are very heavy) with custom-built PCs hacked to run software that actively fights being installed on the computer. The lawyers might have something to say about it as well.

So what do you do as a creative professional who plays by the rules? You need power to run your fancy software. In my case I need flexibility. I need to monitor my video work on a video monitor. So I use a Blackmagic Intensity Pro PCIe card that costs less than $200 and does everything I need. I also have a nice computer monitor that I don’t want to replace every time I upgrade my computer. If you move up the chain a little, maybe you have a fibre channel network. Maybe you have an SDI video system that runs through your whole facility.

You could use iMacs. If you’re really dedicated to Macs and you want to upgrade now, the iMacs have Sandy Bridge processor options and better graphics cards than the Mac Pros. There also seems to be a number of 3rd party options for expanding your iMac using Thunderbolt. Similar to external hard drives, you can plug a box into your iMac’s Thunderbolt port and then plug a couple PCI cards into the box. 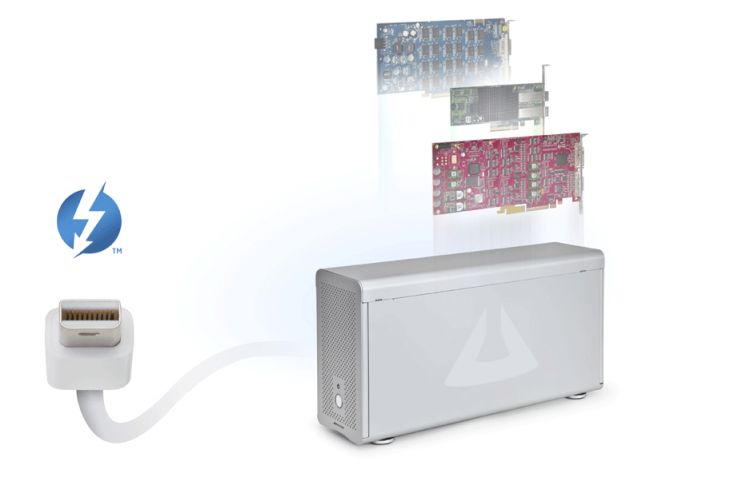 People are so clever!

That box is $979 though. Not exactly a bargain.

What I would recommend is looking at Windows. I know that makes a lot of people mad, but honestly as far as I’m concerned the only thing holding me back from Windows is all these HFS+ disks I have, and all the HFS+ disks I’ll work with in the future. I’m sure as hell not going to edit using MacDrive on Windows. I tried that once. After a couple years I’ll stop using FCP and both Avid & Premiere run great on Windows. FCP was the only reason I started using Mac OS in the first place. I like it. Snow Leopard is great. I also think Windows 7 is great. I’m not so sure about Windows 8 though. But I’m not so sure about Mountain Lion (or Lion). The rush to make the desktop more like mobile is not helping those of us who do fancy stuff on our computers.

In my New School classes I’ve spent much of the first class explaining to the students that things are changing very quickly and that many of the technical things they learn in the class will be obsolete soon. My advice is don’t get too comfortable in your workflows. And don’t buy a new Mac Pro. Your old one probably works fine.