When I was in high school, my friend Taj Musco made a movie called The Pizzaman. He asked me to play a series of pizza delivery boys who are brutally murdered by a pizzacutter-wielding psycho. We first met at the Mount Wachusett Community College Summer Drama Camp when we were 8 years old, so he knew I had some serious acting chops. I was on set for 2 days of shooting, and had a blast. When I saw it several months later I was really shocked. It was like a real movie! It was stylish, funny, scary, and 30 minutes long!

A few years later, The Pizzaman won an award for being the best damn movie on Cable Access TV or something like that. Taj and I went down to the ceremony with the idea of making some sort of behind-the-scenes movie. We staged a goofy event when Taj got the award that was based on the “soy bomb” incident that nobody remembered at the time 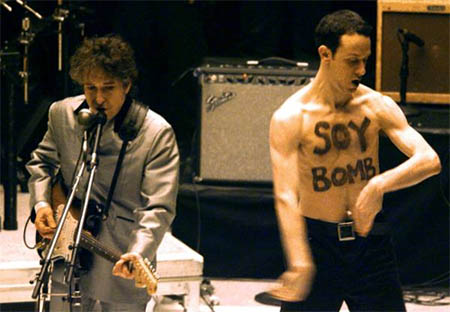 and even fewer people remember it now. But that bit of wackiness inspired a story of behind-the-scenes intrigue. We wrote a fun script called “Is This The Pizzaman?” The title and the man supposedly making the documentary were both inspired by “This is Spinal Tap” but the structure was a lot more like the Christopher Guest movies. We shot an amazing array of elements over a few weeks (on S-VHS!!). We spent the summer editing (tape to tape!!!) and came up with a companion piece that isn’t quite as exciting as The Pizzaman, but is certainly a lot sillier. I made Camera Noise two years later, and you can see some of the beginnings of the arrogance of the “Kyle” character here. Although if I remember correctly, my main inspiration for my interview style was Quentin Tarantino, who talks very quickly and animatedly. I went the opposite direction in Camera Noise, going for the extremely dry tone I prefer now.