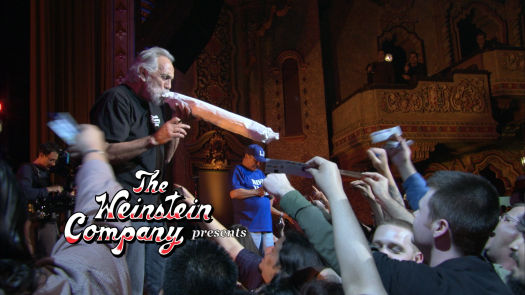 A few Blu-Ray reviews of Hey Watch This are trickling out ahead of the release on 4/20. Most of them mention the lack of an uncompressed audio track. I don’t really know why there wasn’t one included, since I’m a little out of the loop on Blu-Ray production, but I know that the materials were available. Justin Sluss at High Def Disc News suggested that perhaps the audio was compressed in-camera to AC3. However, since the movie was shot by professionals, and not a high school A/V club, I would like to assure everyone that the concert audio was recorded in 14 separate tracks, separate from the picture at 24-bit/48kHz LPCM. I suspect I won’t be able to hear the difference between the AC3 track and the uncompressed I was accustomed to hearing during the mix.

Ian Jane of DVD Talk noticed that “Detail wavers when we go back stage or when the camera turns to the boxed seats, these shots tend to look a fair bit softer than the footage shot on stage, but the overall quality here is not bad at all,” which you might expect when cutting from a $60,000 Panasonic 3700 to a $2500 Canon 5D MK II. And considering that way back then you had to shoot 30.0 fps on the 5D, it’s incredible to me that there’s only a slight difference.

In general people seem to enjoy the film if they’re already fans. Greg Senko at Why So Blu? didn’t think most of it was very funny, and he admitted to rarely enjoying pot humor in general, but again he loved the picture and audio quality. I haven’t seen any reviews from non-techie websites yet, but I’m very curious to see what they think.