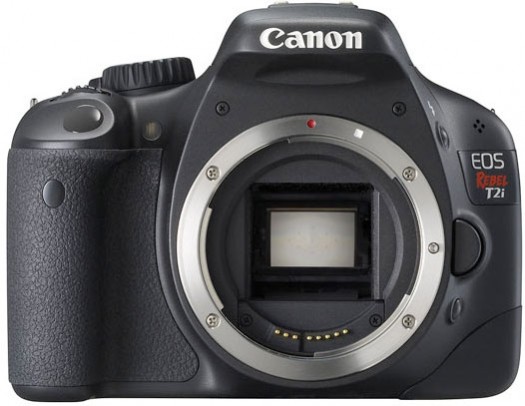 The cost of making movies that look good has been plummeting steadily over the past few years. Way back in the beginning of the century, there was basically just DV, which everyone pretended looked good because there were no viable alternatives. Now we have a plethora of amazing HD options. I am a complete believer in shooting movies with DSLRs. Shane Hurlbut (who you may remember as the “fucking distracting” DP of Terminator: Salvation) brought the Canon 5D to my attention when he suggested using it to shoot portions of the Cheech & Chong concert movie (coming out 4/20 of this year!). At the time they had to do all kinds of crazy things to trick the automatic sensors into making the right exposure, and of course there was the totally boneheaded 30.0 fps. A year later we have full manual control on the 5D, which still has the best sensor around, but what’s exciting me today is the newly-announced $800 Rebel T2i. It seems to have all the video functions of the 7D with a significantly reduced price. Just like the 7D, you can shoot 23.98 fps. Sure, the sensor is smaller on both the 7D and T2i, but the beauty of a real lens is going to go a long way towards making up for the “small” sensor. Of course, you’ll have to get a lens for the thing too. $800 is just for the body.

I’m also a big believer in double-system sound. The sound recording on these DSLRs is suspect, but it’s just always a good idea to have a person on set whose job it is to monitor the machine that records your sound. When it’s going into your camera things start to get crowded. It also limits your camera’s mobility. Something like the Tascam DR-100 is very appealing to me. B&H is selling it for a mere $300! It’s small, portable, and records to the same SD cards the T2i records to. It’s basically the modern version of the DA-P1 DAT recorders I used in film school. And again this is only for the recording device. You’ll need a nice microphone or two.

As exciting as all this cheap gear is (and it is very exciting) you still need something to happen in front of the camera. First off you need a good story. It’s hard to write a good story. If you’ve seen any movies, plays, or read books you know this. Lately I’ve been disillusioned with the quality of films being made on shoestring budgets, but I saw the excellent Humpday recently and it really lifted my spirits. Anyone could make that movie from a technical point of view. It was shot on quite inexpensive HVX-200s. The barrier to making a good movie at this point is talent, and not access to money.

Even with the cost of recording devices heading towards $0, and your own talent being essentially free, you have some costs that aren’t going away. If you know enough people you can probably get a crew to work for free or deferred salaries. If you’re smart about the writing, you can keep the location costs low (access fees, transportation, and art department) but you still have to feed all those people. Lunch is necessary, and breakfast is a good idea to keep people happy. Food can easily be the most expensive part of a micro-budget movie.

And then there’s the big question of what to do with your movie when it’s finished. Yes, feel free to submit it to the big film festivals and hope that somebody picks you. There were 3,724 feature-length films submitted to this year’s Sundance Film Festival, so good luck with that. And even if your film is shown at Sundance, the days of Miramax picking up your film for $10 million are long gone (as is Miramax). You’re very likely to leave Sundance in the same penniless state you were when you started. Do not fall for the myth of “If you build it they will come.” If everyone in the world is building a baseball field in their corn field, heaven runs out of dead baseball players pretty fast.

Your film might be great, but the marketplace for films is terrible. Indie films struggle in theaters, and most people are still locked in a mindset that direct-to-home-video=failure. You certainly can’t make any money by selling downloads on the Internet. I don’t think I have any answers for someone making a movie on their own. It seems like a terrible idea financially. But if you can keep your costs down, you don’t need TWC or IFC Films. The less money you spend, the less money you have to earn back.