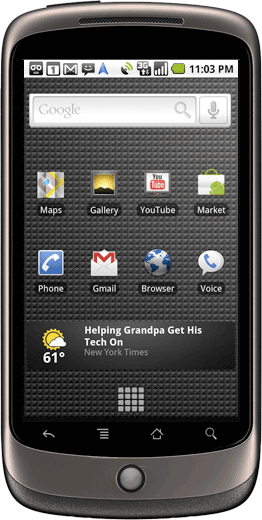 The phone arrived yesterday, and due to some rather dispiriting conversations with T-Mobile customer support, I was unable to connect to the 3G network. You see, I was a VoiceStream Wireless customer from 2002. (Look it up kids, or ask your grandparents about it. They won’t remember it either.) My rate plan hasn’t existed since the days when MySpace was cool. And I obviously didn’t have a data plan. I once tried to use the web with my old phone-phone and it was unbearable. My first step was to call T-Mobile customer support before I purchased the phone in order to verify that I could switch to the lovely Even More Plus plan, which at $59.99 for 500 minutes, unlimited text and data, is a stone cold bargain. I was told in no uncertain terms that the only way the Nexus One will work is if I purchase the phone with the Even More plan, which at $79.99 and a 2-year contract is not a good deal. Even with the $250 subsidy for current T-Mobile customers, I come out behind over two years with that plan. I have the cash now. Why get stuck in a contract?

So I did my research online and it seemed pretty clear that I could use the Even More Plus plan with this phone if I paid full price. I just went ahead and ordered it, hoping for the best. That’s not something I usually do with $530 purchases, but I felt that I was in the right on this one.

The phone arrived yesterday and it is frakking beautiful. My life is already well-integrated with Google, and this takes it even further. All of my contacts are synced with my GMail contacts, and of course GMail works right out of the box. The few times I use a calendar I always use the Google Calendar, and guess what: Google Calendar is the default calendar on the phone.

I set all this up using my Wi-Fi network at home since I still didn’t have a cell data connection. I could make make calls right away, but still no 3G. So I contacted T-Mobile customer support again. And again I was told that I could only use the Nexus One with the Even More plan and that it would not connect to the network otherwise and would I like to sign a 2-year contract now? As if the phone can tell I’m paying $20/mo. more. I didn’t think I was going to get anywhere with this one, so I hung up and again I was left with a phone that makes phone calls and can get on the Internet only if someone forgets to password-protect their router.

I decided to just change the plan myself using T-Mobile’s website, but rate changes don’t go into effect until the next billing cycle, which for me is 2/14. Since I only had 14 days left to return the phone for a refund, I started to worry. Even though everyone on the Internet was telling me it would be fine, I still had to go through the wall of ignorance at T-Mobile in order to make it work. This morning I gave it another shot and was connected to my new favorite person: Shawn F, rep ID #13-20832. He confirmed that I had purchased the phone at full price without a rate plan or contract and as such I could use the phone with any damn plan I wanted. 15 minutes later I was on the 3G network.

The lesson here is that T-Mobile needs to educate their customer support. And don’t give up on your dreams, because they do come true.