When I moved into my apartment 4 1/2 years ago, I had Time Warner Cable and their Roadrunner Internet. The Internet connection was extremely unreliable and after about 6 months we switched to Verizon DSL, which has been rock solid with the exception of a few days with a router failure down the street somewhere, or something like that. It was fixed fairly quickly. The Time Warner SD video signal was also slightly unreliable. I got some digital breakup every once in a while, and on demand type interactive things never worked.

Things got really bad when I got my HDTV almost two years ago. We didn’t have any HD broadcast channels for the first several weeks, and it turned out the wiring on the way into our house was done really badly. We eventually got TWC to send a really great contractor to run a new wire from the tap, which resides in the back yard of our neighbors two doors down. 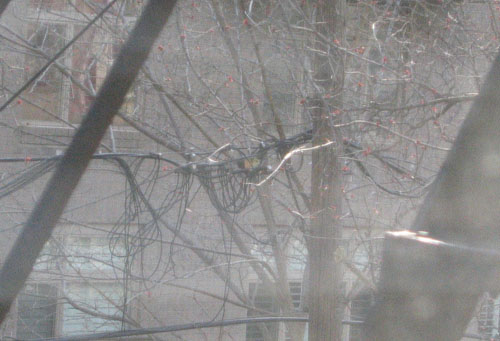 My girlfriend calls it the Time Warner Rat King.

Eventually though, it started to go bad again. We lost Fox and CW HD first, then NBC HD and ABC HD would go out intermittently. Good old CBS HD, the channel we only watch for 30 minutes a week, was always with us. A visit from a TWC tech confirmed that they would need access to the rat king in order to diagnose the problem. Unfortunately, nobody lives in that apartment anymore. It’s been gutted, and the construction workers are MIA. So it’s impossible to get back there without climbing over some fences and trespassing, which is something TWC is unwilling to force their employees to do. And even if they got in there, there’s no guarantee we wouldn’t have the problem again.

The only option we had left was satellite. Since we already have phone and DSL from Verizon, their package deal with DirecTV was very attractive. I’ve been afraid of satellite because in my experience, wires generally work better than no wires. But so far I’ve been proven wrong. Earlier this week we had a DirecTV satellite installed on our roof with a short wire going directly to our new DVR. If anything goes wrong we have easy access to the whole system (except for the parts in outer space). And while it’s subtle, I do think that the picture quality in general is improved. One thing I’ve seen for sure is the quality of Palladia (formerly MHD) which shows difficult-to-encode rock concerts. In the past month on TWC I’d been seeing a lot of macro blocks on cuts and flashes of light, the kind of thing you’d expect to see when there just aren’t enough bits to go around. I don’t see that at all on DirecTV.

The really great thing about DirecTV is the software. The interface is significantly less responsive than the TWC system, but I’m willing to give that up for the many customization options we’re give. The ability to remove channels from the guide is so great it overwhelms everything else, but I also appreciate the multiple ways I can search for programming, and the organization of multiple recorded episodes of the same series into folders.

A few extra HD channels are always nice too. The addition of Bravo HD, Sci Fi HD, and MGM HD are all exciting, especially once Battlestar Galactica comes back.

There’s a very early beta of networked media sharing which allows me to stream MPEG-2 videos from my computer to the DVR, but so far it’s a lot more work than just putting in a DVD or connecting my laptop to the TV. If it was able to play high-bitrate HD material it would be a great way to test out HD video I’m working with, but I’ve been unable to get anything over around 10 mbps to play reliably, and I can’t encode HD with Compressor at anything lower. I managed to get about 1 minute of my Time Travellin’ video to stream at 720p, which was impressive as a demo, but not particularly useful.

Another cool trick is the DirecTV website, which allows me to program my DVR remotely, and order up on-demand videos to download to the DVR. The downloading process is very slow, especially for HD video.

My main complaint so far is the lack of a clock on the front of the DVR box. I looked at the clock on my Scientific Atlanta 8300HD all the time and we don’t have any other devices in the entertainment unit with clocks on the front. I might have to take my binary clock out of storage.

The other problem was something I was able to solve, but I fear not many people would. When the installers set up my box, they told me I had to pick a resolution and stay with it. I could have everything scaled to either 1080i or 720p, regardless of how it was broadcast. I was disappointed at first, but after some digging around I found an “auto” resolution mode, which automatically switches the box to the resolution of the broadcast. My TV has a very good scaler, and I’d prefer that it do the work rather than the DVR, especially for film sources where it has very good 2:3 pulldown removal.