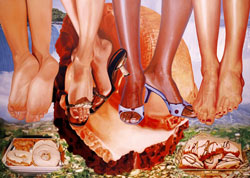 One of those things you pick up pretty quickly working in commercial filmmaking is that you are never, ever, ever, nerver, never, ever allowed to use music in your work without getting permission, and generally paying through the nose for it. Producers also generally tell you not to have any visible brands, artwork, or any copyrightable material without getting permission from the proper authorities first. Basically that means people in movies don’t live in the real world, because that stuff is everywhere. But that message didn’t reach the producers of Expelled, the documentary about the so-called Intelligent Design theory and its allegedly unfair treatment by the scientific establishment (unsurprising given the theory’s lack of… science). The producers of Expelled actually used 15 seconds of John Lennon’s song “Imagine” without paying for it, and expected to get away with it.

AND THEY DID!!!!! This seemed to me like an open-and-shut case of copyright infringement. Yoko and John Lennon’s sons (owners of the publishing rights) sued. But the judge in the case decided yesterday that the filmmakers were commenting on the content of the music, and refused to grant an injuction. I’ve read the decision, and it makes a lot of good points. The film is directly commenting on the lyrics and general message of “Imagine” and in order to make that point, you need to play some of the song. Just as you generally need to quote a portion of a book in order to write about it. Why shouldn’t filmmakers have the same ability to discuss works of art?

This story seems destined to grow more complicated. EMI owns the master license to the song and they’re still waiting to hear from the courts. I think it’s very important, and it’s unfortunate that I’m finding myself starting to agree with the makers of Expelled. Then again, the last big fair use case I remember involved 2 Live Crew and lyrics like “All that hair, it ain’t legit / ‘Cause you look like Cousin It.” Just because it’s crude doesn’t mean it’s not legal.