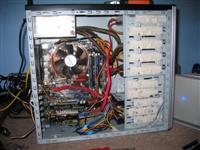 I upgraded my computer a couple weeks ago, swapping out the motherboard, CPU, and RAM, but leaving the hard drives and case alone. I thought it would be pretty simple. I knew Windows would work without a hitch, but I knew from the beginning that I’d have to reinstall the Mac OS because it had been patched to work on my old AMD processor. What I didn’t know was that the OSX-on-a-PC drive interface situation had flipped since the last time I installed OSX. With my nForce4 motherboard, it was a hassle to install onto SATA drives. With my ASUS P5K-E P35/ICH9R motherboard, OSX refused to even see my PATA/IDE drives. My DVD burner and my Mac hard drive were both IDE, so I was in trouble. I went through a lot of work, so I thought I’d document it all for anyone who’s dealing with the same problems. The geniuses over at the Insanelymac forums were a huge help. Here’s what I did:

I’m sure I missed a few steps, but those are the ones that stick out in my memory. There might have been some extra fiddling with ATA-related kexts. I also continue to have a problem mounting the boot disk when I boot with cached kexts. I use the -f flag on the Darwin bootloader to get around that problem.