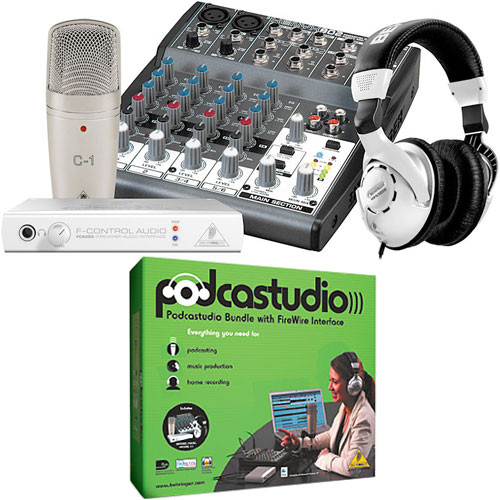 Man oh man do I love new toys. Yesterday I picked up the Behringer Podcastudio Firewire (note the German-style compound word). Now, let me be clear. I have no interest in podcasting. I tried listening to podcasts back when they were all the rage and I didn’t see the appeal. I prefer to read stuff while listening to music. The Podcastudio is just a nice, ridiculously cheap way to start a home recording studio. It comes with a microphone, an adorable little mixer and a firewire interface that brings audio into the computer via a higher quality method than the line level input on my sound card. I’m starting production soon on an animated web series and I need a nice, simple way to record the voices without spending too much money. This is a lot better than my original, misguided plan to use $15 teleconferencing headsets and Skype. I spent a few days researching the available low-end pro audio equipment and I kept coming back to the various components of the Podcastudio. At first I thought I’d just try one or two of them, but the bundle was too good a deal.

My favorite thing so far is the mixer. It has two microphone inputs and two stereo line-level inputs along with tape in and out. It has just slightly more than I need in a mixer at this point. I’m planning to record two voices simultaneously so the inputs are perfect. My main disappointment is the 3-foot XLR cable for the microphone. I want to get that thing as far away from my computer as possible so I’m going to pick up some longer cables, and of course an additional microphone.

So far I’ve only done a little bit of testing but the sound quality is pretty good. There’s a small, but distinct amount of high-frequency noise coming from the mic pre-amps on the mixing board. The microphone seems acceptable without being overwhelmingly great or anything. I’ll probably pick up another one. The headphones are below average, with a tinny, echoey sound, but I appreciate the circumaural design. They will be acceptable for voice monitoring but they’re definitely the weak link in the system.