I’m in Amsterdam for 5 weeks editing an opera + movie. It’s not a movie of an opera and it’s not a movie with opera music. It’s an opera that also has a movie component that will be projected during the performance. There will be performers on the stage who are also in the movie. The movie consists of one giant screen projected in 1080p25 and 4 smaller screens projected in SD PAL anamorphic. The whole extravaganza is directed by Hal Hartley and the music is written by Louis Andriessen.

The movie portion was shot before I arrived on a Sony HDW-750P which shoots 25psf; basically putting the same frame in both fields of a 50i video stream, which is functionally the same as 25p, but not technically the same. It also looks a lot like 24p, with none of the weird motion that I usually see when I watch PAL video. Although there are definite judder effects when people move too much from frame to frame in front of high contrast backgrounds. I didn’t see things like that in Fay Grim, but I’m not sure what accounts for the difference. It’s HDCAM, so it’s 1920×1080 8-bit video. For the first time in my career we’re actually editing at 1080p using Apple’s ProRes HQ in FCP 6. We captured from an HDCAM deck using a Kona LHe card. Everything goes to an Xsan which so far has been able to fairly reliably play back 5 streams of ProRes HQ.

That’s important because in order to simulate the effect of 5 screens, we’ve broken our canvas up into 5 sections. There’s one large picture in the middle for the big screen and one 25% sized picture in each corner. In the theater, some of the screens will actually be perpendicular to the proscenium, but this is a good-enough approximation until we get our 3D holographic monitors going. I’ve set up 10 tracks in our timeline, one for video and one for graphics and other overlays for each screen. I’ve set up 5 motion path favorites in FCP and assigned them to the numbers 1 through 5 on the keyboard. As soon as I cut a clip into the timeline I select it and type the number of the screen it’s assigned to and it moves to the appropriate position. We aren’t doing any rendering at all. This stuff is getting indistinguishable from magic.

A word about ProRes HQ. It looks really amazing. At first I couldn’t see any difference between it and the HDCAM originals, but every once in a while now I’m seeing a small amount of aliasing on high contrast diagonal lines. The kind of thing that is always really tough for digital video. I’m willing to let that slide though, because otherwise it’s fantastic. EDIT: Those problems are entirely an artifact of monitoring through the Kona card in 8-bit mode. In 10-bit, I don’t see any problems with the picture. We’re monitoring on a Sony LMD-2450W 24-inch LCD screen and everything looks incredibly sharp. I am now officially spoiled by HD.

The mystery is over. YouTube, in another in a long series of overdue moves, has revealed some real information about how people find your YouTube videos. In my case, it turns out that my most popular videos happen to be declared “related” to some other, more popular videos. I’ve never questioned the success of the “Bad Webcam Sex” video, which is naturally connected to all kinds of filth that people are mistakenly looking for on YouTube instead of the entire rest of the Internet. What really surprised me was the sudden and unexpected rise of viewers for Two Night Stand. I’ve now learned that nearly 50% of the traffic comes from being “related” to a video called “Fake Wife Swap” which was made for one of those 24-hour film festival challenges. 90% of Two Night Stand viewers come from related videos.

The other big change—which still hasn’t quite worked itself out yet—is the so-called “high quality” option for YouTube videos. On certain videos (the criteria isn’t at all clear to me) you can add &fmt=6 to the URL and get a significantly better video. Unfortunately I don’t know what you have to upload in order to get the higher quality. Is it a higher resolution, or a higher bitrate that I should be going for? Adding &fmt=6 to most videos gets you the usual blender-set-on-purée look. Some guidance from YouTube would be nice.

UPDATE: Brian Gary has an article at kenstone.net explaining the best settings to use to take advantage of YouTube’s higher quality options. 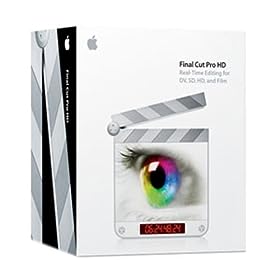 I read a lot of job postings on Craigslist and Mandy. I have RSS feeds for any “editor” jobs that pop up.  Amazingly enough, I’ve ended up with a handful of great contacts from jobs I got through Craigslist. For some reason, among the many misspellings (trailor) and inaccuracies, the one that bugs me the most is requests for editors who can work with “Final Cut Pro HD.” Version 4.5—and only version 4.5—of Final Cut Pro was known as Final Cut Pro HD. It was a mistake to call it that at the time, and it’s just led to confusion. Anybody who is working in Final Cut Pro HD should upgrade. FCP 6 is much better.

My other pet peeve is the people looking for free work who try to make me feel guilty for wanting money for my time and extremely specialized skills. They’re always variations on the theme of “don’t apply to this job if you just got into this business to make money.” Well, you know what, I’ve worked for free on movies when I thought it would be worth my time, and I’ve asked people to work for me for free as well, but anyone with that attitude is not going to be fun to work with. You know who goes into a business hoping to lose money? People with complicated tax schemes, that’s who. Whenever you ask for someone’s time and effort, you need to compensate them. It doesn’t have to be money, but credit and a copy of the finished film are not compensation, they are an obligation. A positive experience is compensation.